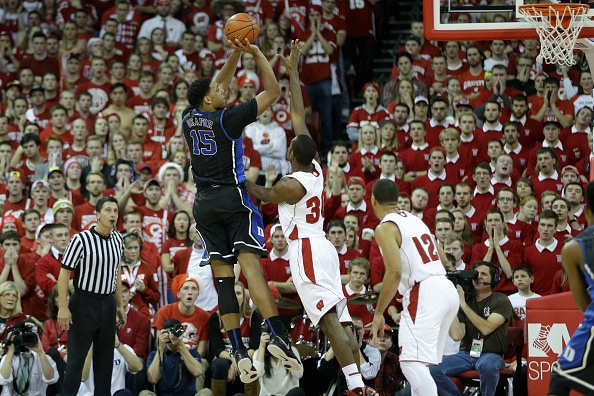 Everyone has already bought into Kentucky, but have you watched Duke play yet? What a stunning mix of experience and gifted freshmen. Playmaker Tyus Jones and Big man Jahlil Okafor have joined up with Junior talents: Sulaimon and Jefferson. There are key reserves for the back court and front court. The Dukies already have two impressive wins on the road against Michigan State and Wisconsin.

Let’s not forget Coach K is at the helm and has done it many times over, 11 trips to the final four, four national titles, and two Olympic gold medals to name a few of his accomplishments. The Cameron crazies will have loads to cheer about. Stock Report: Buy

Kevin Pangos and the rest of his bulldog mates have demonstrated some potential with solid wins over Georgia and St. John’s in the preseason NIT. If you remember last year’s NCAA tournament Arizona took Gonzaga out to the wood shed in the 2nd round. This time the pesky ‘Zags took ‘Zona to overtime. Despite the stifling defense of Arizona, the ‘Zags had a decent showing from Pangos (six assists), Wiltjer had 15 points, and Karnowksi registered a double-double in the paint. They have two more quality wins possible on the schedule, Washington State and UCLA. Coach Few has done a remarkable job over several years to keep this mid-major going to the big dance every year. Stock Report: Buy

This squad has picked up where it left off of from last season. All of their wins have been by double figures. Memphis and Tulsa were two of those Ws. The Shockers average 78 points a game while holding their opponents to 57 ppg. Four players average 10 points or more, with Rob Baker leading the way with 17.8 ppg. Coach Greg Marshall will likely take this team to another top 10 finish and I expect Marshall’s name to be brought up should another big school have a coaching vacancy. Stock Report: Buy

Count on this team being consistently inconsistent. There is talent, but it’s going to take a while to gel and for people to get into their roles a little longer than most teams. Given the wealth of success Coach Matta has had, he will be forgiven if this team is not a top ten rank in the end, but they will still win 20 games and go to the NCAA tournament. Their loss to Louisville showed they are not among the elite this year and lack bread and butter offense if they get in trouble. That’s a recipe for upset city in the 1st round. I recommend you sell this stock. Stock Report: Sell

The university with the most NCAA titles of all-time should not yet fully be counted out. While great talent went pro, Coach Steve Alford brought in some more blue-chippers. Yes, it’s true Oklahoma and North Carolina each dug into UCLA like a kid on candy. The defense is right now a soft zone, but coaching can motivate the aggressiveness and correct positioning.

Turnovers are an issue too, but can be fixed as guys become more comfortable in playing together. This team is capable of scoring in bunches with Norman Powel and Bryce Alford each lighting up the net for over 17 a game, and once they get the defense going they can get out in transition. I recommend you hold. This team is too young and untested yet to know what we have. They have a few more tests this month that will tell us a lot. Stock Report: Hold