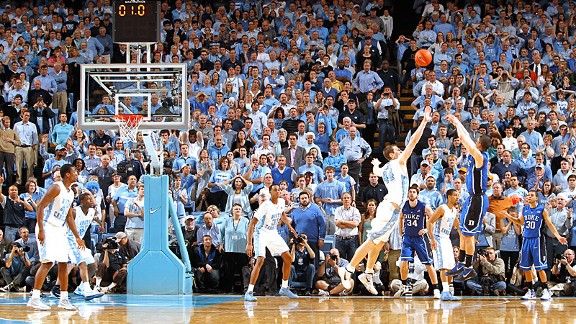 The Atlantic Coast Conference is experimenting with a shorter time clock this season, as the conference unveiled a 30-second clock on ACC courts during the preseason. It has been reported that ACC Coaches and Athletic Directors wanted to try it to see if the drop from the current 35-second standard will speed up the game and give it more scoring by increasing the possessions. Before the installation of shot clocks on every level of basketball, some teams chose to stall over and over again, especially if they had the lead late in the game. That led to fouls and lethargic hoops near the end of games. Some teams, who are clearly outmatched, even employed this strategy from the outset and it led to a molasses paced game with scores resembling football games.

The death of the shot-clock free era came after a December, 1983 contest between a towering Kentucky squad (who went to the Final Four that year), and a Cincinnati Bearcats club that was undersized with minimal ability. The solution for the Cincinnati coach Tony Yates was to use the stall ball tactic and spread the floor with the “four corners offense”. Minutes at a time would pass, accompanied by endless boos before shots were attempted. The final tally was 24-11. That was the last nail in the coffin for those who resisted a shot clock. By the 1985-1986 season, a forty-five second clock was into every arena for NCAA games.

I doubt anyone wants to go back to the days of four corners offense and pitiful 24-11 scores. When the NCAAA shortened it to thirty-five seconds for the 1993-94 season, again the core of fans accepted it and have proved it by coming in droves. The NCAA tournament gets excellent ratings every year.

Granted there are others who feel the game could be faster still than what it is today and have more scoring. It’s not just coaches and athletic directors in the ACC, some in other conferences share the same sentiment. The camp that wants more scoring would like to see the clock eventually be twenty-four seconds, just like international and professional basketball.

The short time allotted in the pros requires offense that can isolate talent one-on-one. The skill levels in college often make it necessary to have various offensive forms to create shot opportunities. Some of those forms of offense will not work in the pros because they require too much time on the clock.

Teams gave a variety of styles and tactics because there is enough time to allow all of these things. That gives fans the drama and excitement that makes college basketball gleam.

If the NCAA ever chooses to go this route of thirty seconds it runs the risk of back firing. Sure, they will get more possessions and a “faster” game. But, the product could turn out to be a sloppy and inferior version of the pro game. Actually, five seconds less makes it easier for the team with more talent to lock opponents down in half court. That in turn forces the less talented team to get in transition to try to get easy buckets and hoist up quick threes. Less time will tempt more talented teams to play full court press, because if the ball gets across the court the other guys gotta get a shot off in short order. Whether there is more pressing or not, you will get more turnovers. With a faster game, you have more transition, and get more fouls.