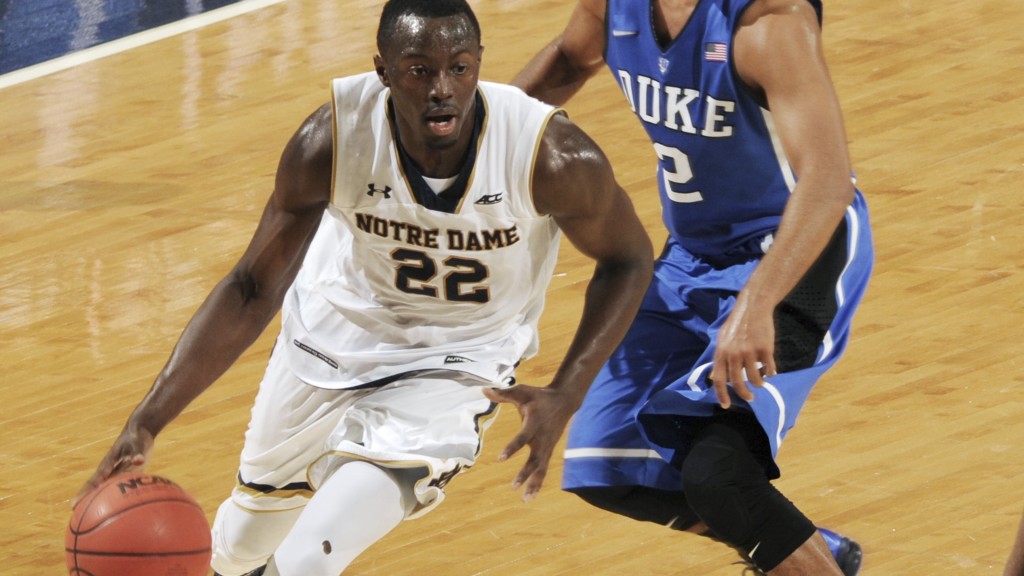 I not ashamed to tell you that for the last few seasons we have watched some nice Notre Dame (20-2, 8-1 Atlantic Coast Conference) teams, that usually fizzled in the big games, and quickly exited the post-season. It was always apparent Mike Brey could coach, but he never seemed to quite get enough difference makers on his roster to face the cream of the crop. Tonight the game could not have been bigger, 6 ft. 11 in. Jahlil Okafor and his fellow No. 4 ranked Duke Teammates swaggered in and had the Irish on the ropes, down 63-53, with over 12 minutes left in the game.

The No.8 Irish had been in this position before trailing by double-figures and won, but this was Coach K (Mike Brey’s mentor) and surely the Blue Devils were not going to relinquish this lead. Not with their center Jahlil Okafor, who was a scoring and rebounding machine with 22 points and 17 boards for the Dukies. Both Coaches made smart adjustments against one another especially in the second half, but Coach Brey has more than one difference maker now, (Connaughton, Auguste, Jackson, and Vasturia) but the most significant guy is his 6 ft. 5 in. senior guard Jerian Grant.

Back In December I boasted about how he was one of the top players in the country. I think now fans all over might realize this. Grant maybe one of the five best regardless of position. I consider him a strong candidate to be a first team All-American at this point. Grant poured in 23, while passing out the cookies 12 times, and swatting away shots by Duke.

Jerian also did it when it mattered most. He drained clutch threes in the first half when his team needed an answer for a Duke basket. With four minutes left he rolled one in over Okafor tying the game at 69 apiece. Grant took it up another notch later, from the top of the free throw line made a bucket just ahead of the clock to give the Irish a 73-70 lead with 67 seconds left.

Then after Quinn Cook drilled a pair of free throws for Duke, Grant and the Irish milked the clock, and then as it got close, Jerian Grant faked a move like he was going to drive and shoot, then suddenly spun around and zipped it over to Vasturia in the corner for a 3-pointer which gave Notre Dame a 76-72 lead. On the other end when Duke tried to get a quick one to the rack, Grant promptly batted away the attempt.

That last seven minutes showed us there is a lot of fight in the Irish. They look like the strong teams the Coach Phelps had in the seventies and into the mid-eighties. Back in the day, South bend was a tough joint to visit. The Irish can play with the big boys and this is NOT an upset. The ACC is for sure the most hard scrabble conference this year. While Notre Dame is in second, Duke drops to (17-3, 4-3), however, the Blue Devils are a terrific team and will be in the thick of it as we march forward.