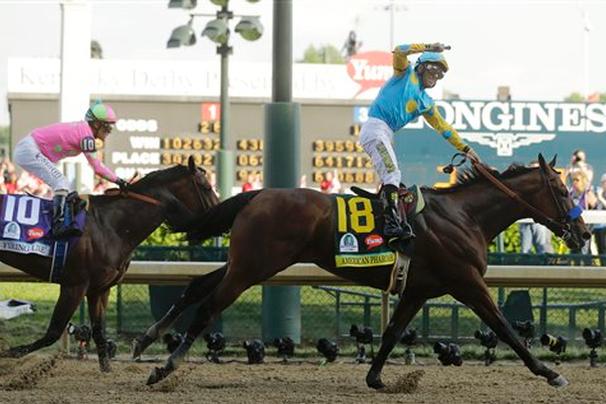 The sport of horse racing could truly use a super-star equine and another super jockey. To give you a picture of just how long that has been, Jimmy Cater was the President of the United States, The Who and the Rolling Stones were still cranking out new hits, Jaws 2 was still due to hit the theaters on the 16th of June in 1978, only George Lucas at that time knew Darth Vader was Luke Skywalker’s daddy and bell-bottom jeans were still cool the last time we had a triple crown winner.

Sure for NBC, they only need the threat of a triple crown winner, same with the Belmont Stakes, which is the last, longest, and toughest of the three races. It doesn’t have to happen for them technically, but on the other hand it does.

I know the sport of horse racing won’t suddenly pole vault back up to where it was in the 1920’s, 30’s, and 40’s, when it was king along with boxing and baseball, but it can only help. Since 1919, the sport has only been treated to 11 triple crown studs, and the seventies were an unusually giving decade with three winners of the triple crown. I say 37 years is long enough to wait. The audience is ready for something special and it’s possible this Saturday, June 6th we may get it.

Thirteen horses have galloped along,  teased and taunted us with consecutive victories in the first two legs over the last 37 years only to come up shy. All sports NEED a Rock-star that draws us in and if there is a triple crown winner this year it helps you have fresh hopes of another one in the near future. After too many years, with an endless hiatus from watching a triple crown horse, it starts to feel like a myth.

Victor Espinosa is a perfect story to become a star jockey. He was the eleventh child out of 12th and an immigrant. He has built himself up over the years into a fine jockey. A win like this puts him up with the Gary Stevens and Calvin Borels, if he isn’t there already. Twice Espinosa was on the back of a horse that won the Kentucky Derby and Preakness, only to lose in the Belmont. This is his third shot at it.

Victor Espinosa has been in the winner’s circle for all of the world’s big Thoroughbred championship races: (Breeder’s cup, Santa Anita, Dubai Golden Shaheen, Windsor Castle stakes, 3 Kentucky Derbys and 3 Preakness Stakes),  except never for the BELMONT. He always seems to lose here, so at least he has learned what went wrong before right? You couldn’t screenwrite a more glorious opportune time for Espinosa to finally pull it off .

Does American Pharaoh have the juice to pull it off? Most horses are not used to a mile and a half long race, and the jockey has to time everything correctly, make a move too soon and their is no electricity for the final stretch, wait too long and your horse takes too long to get in gear and finishes in second. Also, most of the horses who enter the Belmont are ones who sit out the shortest of the races, the Preakness, and they are well rested.

There are only seven horses taking on American Pharaoh, who at Bovada is a -120 to win. The next closest in the odds is Frosted, who is a +550. The longshot of the bunch is Frammento at + 4000. For the underdog money it’s hard not to lay a few on Frammento, check out that payoff, but somehow because the sport needs it and Espinosa is overdue, I think American Pharaoh pulls it off, but just barely.